This is The Funeral of the Anarchist Galli by Carlo Carrà. To quote Wikipedia:

The subject of the work is the funeral of Italian anarchist Angelo Galli, killed by police during a general strike in 1904. The Italian State feared that the funeral would become a de facto political demonstration and refused the mourning anarchists entrance into the cemetery itself. When anarchists resisted, the police responded with force and a violent scuffle ensued. 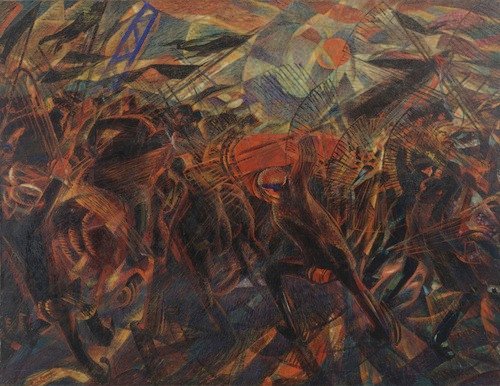 I saw it in the Tate’s Futurism exhibition last year, and thought it was pretty striking, but looking at it now I find myself strongly reminded of a lot of images I have seen in the news recently: that angry claustrophobic mass of figures, the horses, the batons.

Over the past few weeks we’ve had violent confrontations between protestors and police on the streets of London, we’ve had protestors closing down high street shops in protest against tax-avoidance by big business, we’ve even had Mrs Prince Charles poked with a stick by a group of people chanting ‘off with their heads.’

And we’ve even had the word ‘anarchist’ being thrown around, a word which seems as dated as Futurism itself. I don’t know how many of those who have been on the news smashing windows and setting fire to things would say they were anarchists, and I don’t know what they mean by it. But then perhaps anarchism has always been a mood as much as a political ideology. And yes, I know, political theorists have devised versions of anarchism which are more sophisticated than the caricature; but still, that wish to break down the overarching structure of society is a remarkable thing. You have to think that the world is very broken indeed to believe that throwing all the pieces up in the air is likely to make it better.

But then whether many people in the UK are ‘real’ anarchists is hardly the point; what matters is that a lot of people are angry. And not just in Britain. Are there enough of them, are they angry enough, to have a powerful impact? And for better or worse? These are interesting times.