I can’t say I was excited by the prospect of seeing The King’s Speech, because I think the British film and TV industry is usually at its least interesting when making middlebrow costume dramas about posh people in country houses.

The genre seems to have a completely unearned prestige which serves as a substitute for things like originality and ideas. And all Britain’s favourite thesps get to stick on some facial hair and a frock coat — or a stiff gown, as appropriate — and do a slightly hammy turn, and everyone oohs and aahs at the costumes and the locations, and it’s all very cosy and boring. 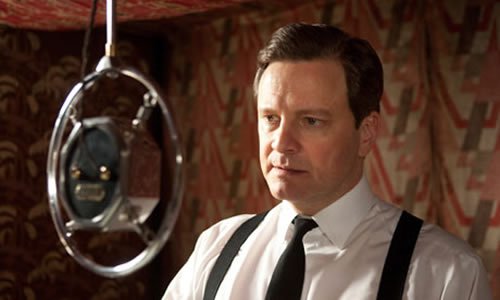 But everyone has been raving about this film, and when someone suggested a trip to see it I thought I might as well. And generally speaking I think it was a good movie. Even a very good one. The prince who has to have speech therapy is a good hook to hang a film on, the script is  often clever and funny and only occasionally resorts to heavy handed historical exposition, and Colin Firth’s performance is excellent, as are most of the supporting cast — although I wasn’t as impressed as some people by Geoffrey Rush as the speech therapist Lionel Logue. And I thought it looked great; I particularly enjoyed the rooms full of old fashioned radio equipment with giant microphones and big dials.

On the other hand it felt like a very basic, meat and potatoes piece of story-telling. It does have a good story to tell, and that is half the battle, but it takes you through it in a very predictable, unadventurous way. And it did feel too emotionally manipulative sometimes. Film is an emotionally manipulative medium anyway; in some ways that is one of its strengths. And this is a thoroughly mainstream film, and I don’t demand that it should be abrasively intellectual and spare and minimalist… but sometimes when the swelling background music was a bit too obvious at telling me what to feel, or when some scene had been too obviously crafted to ram home some message or other, I started to get a bit irritated.

Perhaps the problem is that Colin Firth’s character is just too sympathetic. The whole film is structured around poor prince Bertie and his terrible burdens, and there’s never a hint that he has a nasty or selfish bone in his body. He may have been a good man with a profound sense of duty, but presumably he wasn’t actually a saint.

Anyway, I did basically enjoy it and do basically recommend it. With a few reservations.

2 replies on “The King’s Speech”

The friend I saw it with, who has an eye for design, came out of the theater raving about Lionel Logue’s wool suits. But like you, I was most impressed with all the old radio stuff.

Ah, I noticed Logue’s wallpaper but I didn’t notice his suits.