The Chancellor’s Autumn Statement was pretty depressing all round, but there was one particular part of it that seems worth a comment. Which is that they will ‘review the implementation of the EU Habitats and Wild Birds Directives’. The Chancellor said:

We will make sure that gold plating of EU rules on things like habitats aren’t placing ridiculous costs on British businesses.

You might think that the Conservative party would instinctively see the value of trying to preserve something of our shared natural inheritance, so that there is still something there to hand on to our children and grandchildren. It seems like a good, traditional conservative instinct. But no, for George Osborne the environment is just another kind of red tape that is getting in the way of the only thing that matters: private enterprise. 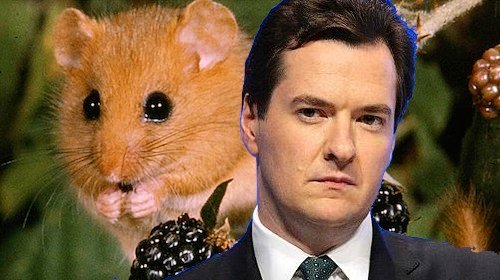 I’m never quite sure what’s going on with people who place so little value on the environment. The first possibility is that they just don’t care. They’ve never had any interest in wildlife, they couldn’t recognise the most common birds in their own garden, they’d rather see a well-manicured golf course than a scruffy bit of pasture with wild flowers growing on it. They’ve never had an emotional relationship with the natural world, and so the idea of habitats being destroyed and species going extinct simply has no resonance for them. And if you feel that way, then if the choice is between creating jobs or preserving a piece of habitat… well, there’s no conflict to be resolved.

And I’m sure there are those people: people who regard the whole idea of ‘the environment’ as ridiculous sentimental tosh. But I’m not sure they’re the majority. Most people at least like to see butterflies and hear birdsong, they enjoy the bluebells in spring and the leaves changing colour in the autumn. But there is an idea, I think, that environmental concerns are exaggerated. Because if you walk through the British countryside in May, everything is an incredible lush green, the hedges are thick with white hawthorn blossom, the verges are full of cow parsley and oxeye daisies, and there is a bird singing in every bush. Everything seems right with the world.

But actually the British countryside is profoundly ecologically impoverished. Just this week we had the release of new official government figures showing that farmland bird numbers are at their lowest ever, down 50% since 1970. That’s a 50% decline over a period when the environment has been a relatively strong political issue; and 1970 was hardly some kind of pre-industrial idyll anyway. And even that 50% figure doesn’t tell the whole story, because that’s the overall number: when you dig into the details, it turns out that some species have held up relatively well — which means that others have declined catastrophically.

The list of badly-hit birds makes incredibly depressing reading. It includes many of the species that once would have been seen as the most typical species of the British countryside, the birds that we have poems, Christmas carols and nursery rhymes about: cuckoo, skylark, turtle dove, partridge, nightingale. Others are less famous but no less typical: yellowhammer, corn bunting, tree sparrow, yellow wagtail, wood warbler, spotted flycatcher, lesser-spotted woodpecker, willow tit, redpoll. Some of them are generally much less common and harder to find; others have been eliminated from large parts of the country altogether. Many of the species I’ve mentioned are down by 70%; the worst-hit, like the turtle dove and the grey partridge, are down by over 90%.

And it’s not just birds. Take butterflies, for example; many of the less common butterflies in the south of England are downland species: that is, they live on chalk hillsides, preferably grazed by sheep. Well, there’s chalk all the way across the country, and there are still plenty of sheep, but if you want to find those butterflies, you have to go to special sites managed for wildlife by conservation charities. Think about what that means: those species coexisted with agriculture for thousands of years. No-one made any special effort to protect them. Now they only hang on in little scraps of land which have to be specially managed for their benefit.

There was a time when the normal farmland which makes up the vast bulk of the British countryside was a fairly rich habitat, supporting a wide variety of wild flowers, insects and birds. But with modern farming practices that’s really not true anymore. There are various different reasons — pesticides, herbicides and fertilisers are part of it but not the whole story — but the result is that a lot of modern British farmland is biologically pretty sterile.

That BBC News article has a telling quote from Harry Cotterell, the vice president of the Country Land and Business Association:

Finally we might see a time when human beings are treated with about the same importance as bats, newts and dormice.

The thing is, I can entirely see that it can be incredibly frustrating for someone who is trying to run a farm or some other small business, when some government bureaucrat tells them that they can’t drain a pond because it has rare newts living in it. But the idea that human self-interest is being continually thwarted because we as a society are bending over backwards to put wildlife first… it’s just ludicrous.

2 replies on “The next sacrifice on the altar of mammon: British wildlife”

It’s pretty common to hear from both left and right that human beings come first, as if nightingales and dormice were some sort of optional decoration for those backward types who don’t live in cities, (or if they do, are presumed to long for some prelapsarian Arcadia). Concern for the environment is often seen as nostalgic, anti-human, and fundamentally reactionary – something that given its head would keep everyone in poverty. Do you want cheap food or not? they ask.

You will hear highly educated people acting proud of the fact that they can’t name any plants or birds, as evidence that they have their minds directed to higher, human matters.

The chance of a prelapsarian Arcadia is long gone, of course; I would like to avoid a dystopian post-ecological nightmare, though.