This, according to the blurb, is a ‘controversial reworking’ of the famous Anglo-Saxon poem of the same name*. ‘Controversial’ and ‘famous’ are both relative terms here, of course. 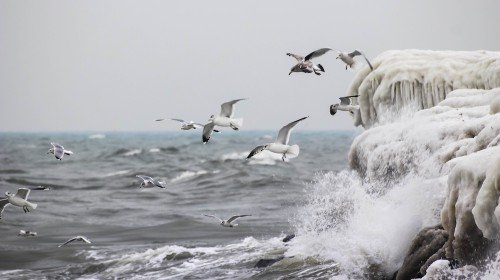 I assume the controversy mainly arose because the poem is given a female narrator. To quote the introduction:

I also transformed the male ‘Wanderer’ of the poem’s title into a female figure and focused on that narrator alone, even though the original poem seems occasionally to suggest two distinct speakers. (A point on which some academics disagree.) This rather drastic change was made for two reasons. Firstly, the traditional male-male relationship of the lord and his faithful retainer takes on a strongly homoerotic charge when read with a modern sensibility and, writing as a female poet, this posited relationship lacked authenticity in my early drafts. Secondly, I originally undertook this translation to provide a centrepiece to my third poetry collection, Camper Van Blues, which is itself themed around the concept of a lone female traveller.

I think the change works well. The themes of exile and loss take on a slightly different flavour but work just as well with a female narrator. It makes it a different poem, but it’s not as radical a change as you might imagine.

There are two other notable tweaks to the poem. The first is to strip out the Christian imagery. Holland reads The Wanderer as an essentially secular poem with ‘artificially imposed religious overtones’, which is certainly an entirely plausible reading; others have found it to be deeply infused with a Christian sensibility.

The third change, which I thought was perhaps more striking than either of those, was the inclusion of a few modern references. Not that many of them, but for example in the description of men lost in battle, she writes [every other line is supposed to be indented]:

Some fell there in the line of duty,
caught off-guard in the crossfire; others
were blasted to bits at the roadside
or picked off by snipers

The Wanderer deals with that essential Anglo-Saxon theme of a world in decline, and living among the evidence former glory. Taking that idea and setting it in a modern world gives the poem a remarkable post-apocalyptic feel. I’d never made that connection before, between Anglo-Saxon poetry and, say, Mad Max; but actually it’s surprisingly apt.

Anyway, I’m generally in favour of people doing interesting reinterpretations of the classics, and I think this is completely successful. It does bring something new, but it also captures the gloomy beauty of the original.

* My awful pedantic soul (it’s a terrible affliction) requires me to point out: I’m pretty sure the title is a modern addition, like all the titles we give Anglo-Saxon poems.

» The photo is Flying in the same direction, © Susanne Nilsson and used under a CC by-sa licence.