I thought I ought to reread some of those Great Novels which are sitting on my shelves and I haven’t read for years. I’m not sure why I picked up Moby Dick in particular, but after a few pages I was thinking oh, man, I’d forgotten how funny this book is, and so brilliantly written. But after a couple of hundred pages I remembered why it has a reputation for being unreadable, or at least unfinishable. 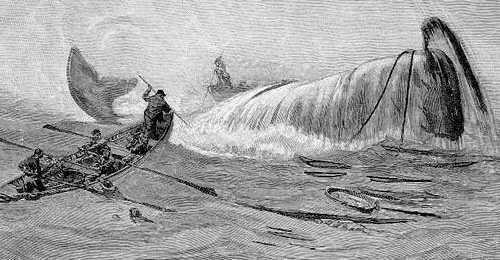 The opening scenes, where he meets Queequeg, and goes to the whaling chapel, and joins the Pequod, and the crew are all introduced, are truly superb: grotesque and funny. But then after they get to sea, the book loses forward momentum. Partially because there’s not much plot going on, and it’s very episodic, but especially because of Melville’s (or, I suppose, Ishmael’s) long discourses on whales and whaling. Even those are interesting, and frequently well-written and entertaining. But there’s an awful lot of it, and it’s just rather pale and conventional compared to the weirdness of the narrative stuff. It’s as though Bram Stoker had decided that Dracula would be greatly improved by a few chapters about folk customs in Romania and the best techniques for garlic cultivation.

So the book is rather becalmed. But towards the end it picks up again and builds to a suitably grotesque crescendo when they finally track down Moby Dick.

In all seriousness, although I do think this is a great novel, I also think you could greatly improve it by judicious editing. You could cut it down to about the half and length and change it from a sprawling, discursive tome into something short, dark, strange and intense. Like Heart of Darkness with whales.

Since it’s out of copyright, I suppose I could do it myself. As a public service.

Have you read Ahab’s Wife by Seena Jeter Naslund?

Ahab’s Wife follows much the same pattern as Moby Dick with an overlong middle that sags somewhat, but it’s worth the effort if you can skim read the middle. It’s an interesting perspective from the other side of the boat.

Cool, I’ll keep an eye out.

Me, I love every becalmed word of Moby Dick. Cutting it would be like doing what Peter Jackson did to The Lord of the Rings. But if you just want the sea adventure, you might try the 1956 John Huston film with script by Ray Bradbury, Gregory Peck as Ahab and Richard Basehart as Ishmael.

Are you suggesting that the LOTR films should have been even longer? Just the idea of it makes me feel slightly queasy.

I’m not suggesting turning Moby Dick into an ‘adventure’ exactly: I don’t think that Melville’s strength is an ability to write a gripping yarn. His strengths are atmosphere, imagery and above all as a prose stylist. But I think those strengths come out in the narrative and tend to get lost or diluted in the expository bits.

Longer? Omigawd, I never thought of that. Please no.

And mind you, I’ve only ever seen one of the trilogy. But Jackson’s run-and-fight LOTR doesn’t look much different to me than an episode of Transformers.

I’ve always thought Whitman’s “Song of Myself” could use a bit of tightening, too. But I guess prolixity was more widely appreciated back then.

Imagine the arguments you could have!

I think there are, or have been, abridged editions of Moby Dick in print, but by no means all of the “ephemeral” passages are what they appear – there’s a lot of occult / Masonic subtext in there that I’m not remotely qualified to deconstruct.
I never finished the book. Somewhere around The Whiteness of the Whale, I completely lost track of what he was doing. Happens to a lot of readers about that point, I’m told. I may have another go at it soon.

“there’s a lot of occult / Masonic subtext in there”

Sounds like exactly the sort of thing that’s best left to scholars of literature and esoteric movements. Cut it out and leave the rest of us with something a bit snappier :D