Half of a Yellow Sun is a novel about the Biafran war, told from the perspective of three people on the Biafran side. It switches back and forth between their lives pre-war and the war years. Adichie is too young to have been part of the war herself, but I gather from the Author’s Note that her parents and grandparents were in the middle of it, and that this novel is at least in part based on their stories about it. 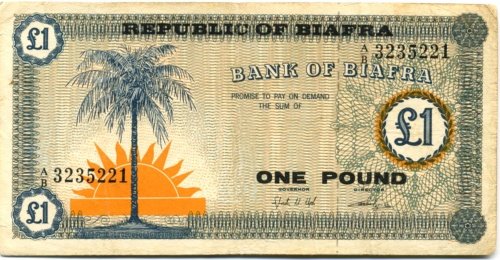 Although it is in a sense written from a partisan perspective, in that all the main characters are fairly keenly pro-Biafran, the novel is inevitably written and read with the knowledge that Biafra was a doomed entity. So that gives a gloomy irony to all the optimistic political rhetoric.

Sitting here with the book in front of me, with the Daily Mail quoted on the cover as saying that it is “without doubt, a literary masterpiece and a classic”, I am churlishly inclined to start finding fault, because I’m not quite sure that it is an undoubted instant classic. It’s a well-written if fairly conventional novel with strong characters, touches of humour even amid the gloom, a streak of satire and interesting subject matter. But a masterpiece? Maybe not.

Still, it’s a really good novel and something of a page-turner, and I would unreservedly recommend it to anyone.

My wife just read this and really enjoyed it, with pretty much the same reaction as you. It’s well worth reading.

Yup. I agree with your wife’s agreement with me :)

I’ll be interested to hear what you think. I’ve got a whole stack of books lined up even without the African & world reading challenges, so I doubt I’ll be reading it soon, but I’d like to read it some time.

BTW, I assume because your browser is autofilling the homepage box when you post a comment, your URL is still coming up as scavella.blogspot.com.