This was a welcome relief from my ongoing attempts to get Internet Explorer to behave itself. Making Money picks up the story of Moist von Lipwig, the former con man who took over Ankh-Morpork post office in Going Postal. In this one Vetinari offers him the chance to run the Mint. 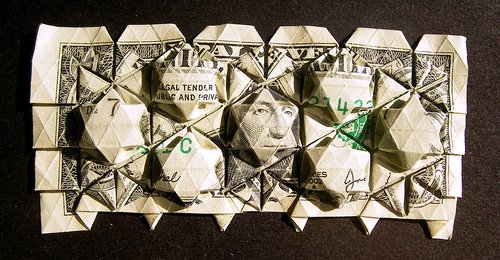 I said that one of the things I liked about Going Postal was that there weren’t too many genre jokes and clichés surrounding post offices for Pratchett to plunder, so it was more character and situation driven; the same is true here. This one isn’t perhaps quite as strong. Good though.

» Since I don’t have a lot to say about the book, I mainly posted this reviewette as an excuse to show that neat origamied dollar bill, which is taken from Eric Gjerde‘s Flickr account and used under a by-nc Creative Commons licence.