Because the tomatoes at this time of the year are so watery and tasteless, I thought I’d try this trick to perk them up a bit. 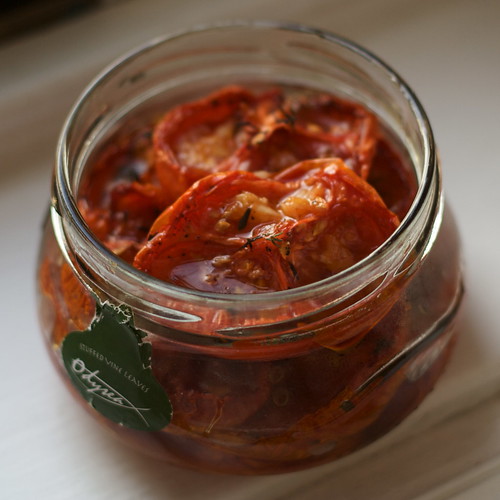 The recipe is based on one from Madhur Jaffrey. The tomatoes are halved, de-seeded, sprinkled with salt, pepper, olive oil, garlic, chilli and fresh thyme, then cooked in the oven at 70C for about 7 hours. They have an intense, tomato-y flavour but still have a bit of squish to them: they’re not as chewy as sun-dried tomatoes usually are.

These look very delicious. I might just try the recipe when I can get hold of some fresh thyme though “7 hours” is rather daunting.

I love sun-dried tomatoes and have only just tasted oven-dried ones at an Italian restaurant last week. They weren’t that good but most probably it’s their fault since the other food weren’t up to standard either except for the focaccia bread with olive oil and balsamic vinegar dip.

I expect you could do them at a higher temperature for a shorter time and they’d be fine :)