And a peculiarly London sun – against which nothing could be said except that it looked bloodshot – glorified all this by its stare. It hung at a moderate elevation above Hyde Park Corner with an air of punctual and benign vigilance. The very pavement under Mr Verloc’s feet had an old-gold tinge in that diffused light, in which neither wall, nor tree, nor beast, nor man cast a shadow. Mr Verloc was going westward through a town without shadows in an atmosphere of powdered old gold. There were red, coppery gleams on the roofs of houses, on the corners of walls, on the panels of carriages, on the very coats of the horses, and on the broad back of Mr Verloc’s overcoat, where they produced a dull effect of rustiness.

from The Secret Agent by Joseph Conrad

Of all the things that have changed in London, that cut us off from our ancestors’ experience of the city, perhaps the most profound, more even than the sounds and the smells, is the fog. Not just the thick pea-soupers which brought visibility down to a few feet, but the continual smokey haze from millions of coal-burning fireplaces. 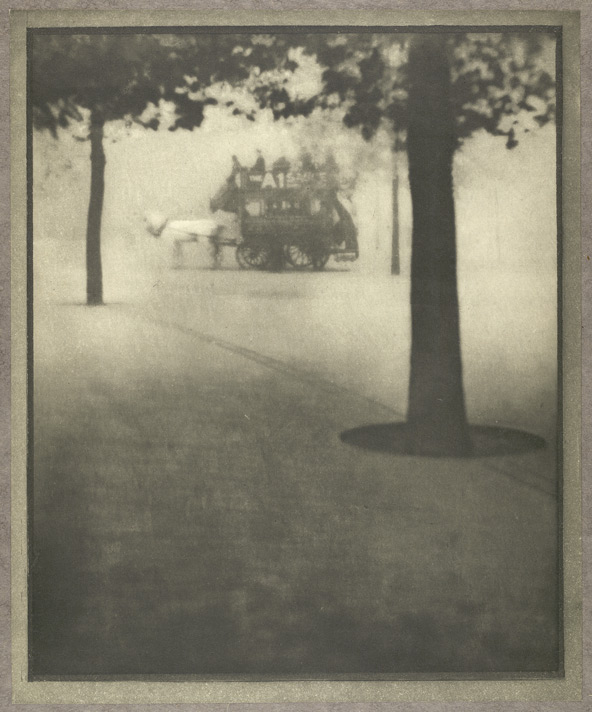 Just as people go on painting holidays to Cornwall or Tuscany, Monet and Whistler used to come to London for the special quality of the light. For Whistler

when the evening mist clothes the riverside with poetry, as with a veil, and the poor buildings lose themselves in the dim sky, and the tall chimneys become campanili, and the warehouses are palaces in the night, and the whole city hangs in the heavens, and fairy-land is before us—then the wayfarer hastens home; the workingman and the cultured one, the wise man and the one of pleasure, cease to understand as they have ceased to see, and Nature, who for once has sung in tune, sings her exquisite song to the artist alone.

The whole way the city was built was affected by the fog.

Building News, in 1881, discussed the fact that ‘the smoky atmosphere has done its best to clothe our most costly buildings in thin drapery of soot … they soon become dark and sombre masses … all play of light and shade is lost.’ That is precisely why architects decided to clothe their buildings in bright red brick and shining terracotta so that they would remain visible; the features of nineteenth-century building, which may seem vulgar or gaudy, were attempts to stabilise the identity and legibility of the city.

from London: The Biography by Peter Ackroyd

But it didn’t just apply to buildings; the city’s archetypal tree, the London Plane, which lines the streets and squares of the city and provides roosting space for the starlings, was planted because with its thick leathery leaves and flaking bark, it could survive the smoke. The classic park planting scheme — geometrical beds of brightly coloured hardy annuals — surely resulted not from a lack of imagination among park-keepers, but a need to show up in the gloom, resist the air pollution for as long as possible, and be easily replaceable if the plants died.

The sun was shining and at the end of the street between the houses the sky was blue. Gauzily the distances faded to a soft, rich indistinctness; there were veils of golden muslin thickening down the length of every vista. On the trees in Hanover Square gardens the young leaves were still so green that they seemed to be alight, green fire, and the sooty trunks looked blacker and dirtier than ever. It would have been a pleasant and apposite thing if a cuckoo had started calling. But though the cuckoo was silent it was a happy day. A day, Gumbril reflected, as he strolled idly along, to be in love.

from Antic Hay by Aldous Huxley

It’s easy to forget just how physically dirty the city used to be. There was a general griminess over the whole city; you get a sense of it looking at old photos, but you didn’t quite appreciate how dirty the buildings were until you saw them being cleaned. The process of cleaning away the smoke stains from central London has been pretty much finished now, but there was a time when you often found a newly cleaned building next to a filthy one, and the contrast was almost black and white. The Houses of Parliament used to be a gloomy, almost sinister-looking building; now it’s delicate and honey-coloured. It has shifted from vampire gothic towards fairy-princess gothic.

Searching for references to fog in the British Library collections, I found this, an account in the Penny Illustrated from 12th October 1861 of a display given by the great tightrope walker Blondin at Crystal Palace:

Blondin on the terrace rope, illuminating himself and the palace, was justly expected to outshine all former spectacles. Unhappily, the mist that had hung about all day and woven itself with the twilight into a veil that wrapped every every statue, tree, and tower in early darkness, thickened into fog soon after sunset. At half-past six, when Blondin started in his basket for the mast, he could be seen only a few yards off, until he lighted the pan of blue fire he carried in each hand. On reaching the mast he kindled the lights fixed there; but they did not suffice to show even the outline of his form. For the next half-hour or so he was completely invisible–at any rate, to our eye. Yet he must have traversed the rope right and left for a considerable distance; for he exploded the fireworks in his barrow, as announced, and made as brilliant an exhibition as the fog would permit. Here and there arose from the grounds an applauding recognition as he made his way back to the mast, and he was warmly greeted on his return to the palace.

The Chinese government will not doubt be praying that nothing similar happens in Beijing this summer.

» The photo is of Hyde Park corner, taken by Alvin Langdon Coburn and found on the British Library website. Other foggy pictures from his 1909 book London: Houses of Parliament, Trafalgar Square, Kingsway, Paddington Canal, Kensington Gardens. The Monet painting of the Houses of Parliament in the fog is one of several on Wikipedia. The lithograph of the Thames seen from the Savoy is by Whistler and is from the Tate’s Turner Whistler Monet exhibition from a few years ago. And as a reward for reading the small-print: Animal from the Muppets Animal sings Gershwin.

4 replies on “A London particular”

It took a lot of willpower not to include that passage from Bleak House :)