I went to see Un prophète today, which is, as you can see below, un film de Jacques Audiard. Though obviously I saw the subtitled version.

It’s a gangster/prison drama about a young French Arab, played by Tahar Rahim, who arrives in prison at the start of the film and is immediately approached by a Corsican gang who threaten him and offer him protection in return for killing someone. 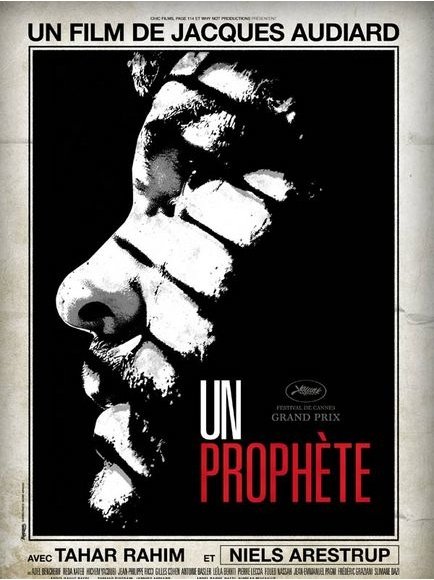 The film starts with Malik arriving in prison — we learn almost nothing of his life beforehand — and ends when he leaves, so it’s set in a very grey, constrained, claustrophobic world, and visually it’s mainly a kind of gritty realism. It’s rather Wire-esque, both in that visual style and in the attention to the procedural and mechanical details of prison life.

I thought it was a very good film. It works as a gangster movie — perhaps slightly slower-paced than you might expect from most American movies in the same genre, but none the worse for that. But it’s a gangster movie with an underlying serious-mindedness and darkness, and with other themes running through it, most obviously the French muslim immigrant experience, that give it a bit of heft. And it has a very good, understated central performance by Tahar Rahim.

I was reading your previous blog comment on the WordPress theme design you took part in several years back, and really liked the way you analysed them.

I was hoping to invite you to take part in the 2010 Voxbiblia WordPress Theme Design Competition, in which Voxbiblia is sponsoring more than $2000 worth of prizes! It would, of course, also be fantastic if you’d be willing to mention this competition on your site, but that’s a different matter altogether :) More details can be seen at http://blog.voxbiblia.com, and we’ve also set up a Facebook events page (http://www.facebook.com/event.php?eid=296834441810&index=1) should you wish to invite your friends to the competition as well!

Here’s a bit more about Voxbiblia:
Voxbiblia is an audio Bible company that strives to use the wonders of digital technology to bring down the boundaries limiting Christianity. As a result, we have been trying hard to come up with ways to generate more blog skins for Christian uses. We have since come up with a competition (just launched last Friday) in which we hope will encourage people (Christians and non-christians alike) to create Christian themed designs, which will later be distributed for free.

Would you be interested in participating? Do let me know! I hope to hear from you soon!

Much as I’d like to win one of those iPads, I think it would seem a bit weird entering a Christian theming competition, considering some of the things I’ve said about religion on this blog :)

Good luck with the competition, though.