Some less political stuff from P.T. Barnum’s The Humbugs of the World. This is one of several mail scams:

The six letters all tell the same story. They are each the second letter; the first one having been sent to the same person, and having contained a lottery-ticket, as a gift of love or free charity. This second letter is the one which is expected to “fetch.” It says in substance: “Your ticket has drawn a prize of $200,”—the letters all name the same amount—“but you didn’t pay for it; and therefore are not entitled to it. Now send me $10 and I will cheat the lottery-man by altering the post-mark of your letter so that the money shall seem to have been sent before the lottery was drawn. This forgery will enable me to get the $200, which I will send you.” 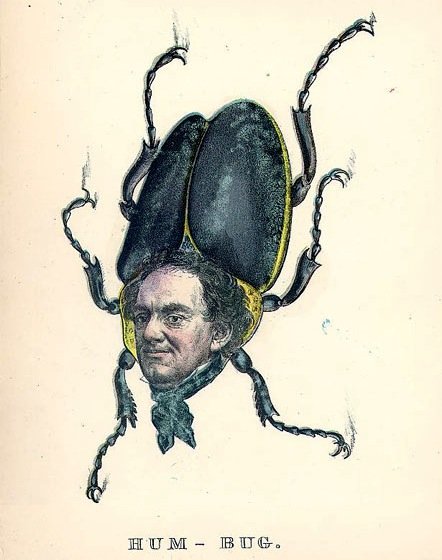 And Barnum on booze:

It is a London proverb, that if you want genuine port-wine, you have got to go to Oporto and make your own wine, and then ride on the barrel all the way home. It is perhaps possible to get pure wine in France by buying it at the vineyard; but if any dealer has had it, give up the idea!

As for what is done this side of the water, now for it. I do not rely upon the old work of Mr. “Death-in-the-pot Accum,” printed some thirty years ago, in England. My statements come mostly from a New York book put forth within a few years by a New York man, whose name is now in the Directory, and whose business is said to consist to a great extent in furnishing one kind or another of the queer stuff he talks about, to brewers, or distillers, or wine and brandy merchants.

Aloes, alum, calamus (flag-root) capsicum, cocculus indicus, copperas, coriander-seed, gentian-root, ginger, grains-of-paradise, honey, liquorice, logwood, molasses, onions, opium, orange-peel, quassia, salt, stramonium-seed (deadly nightshade), sugar of lead, sulphite of soda, sulphuric acid, tobacco, turpentine, vitriol, yarrow. I have left strychnine out of the list, as some persons have doubts about this poison ever being used in adulterating liquors. A wholesale liquor-dealer in New York city, however, assures me that more than one-half the so-called whisky is poisoned with it.

Besides these twenty-seven kinds of rum, here come twenty-three more articles, used to put the right color to it when it is made; by making a soup of one or another, and stirring it in at the right time. I alphabet these, too: alkanet-root, annatto, barwood, blackberry, blue-vitriol, brazil-wood, burnt sugar, cochineal, elderberry, garancine (an extract of madder), indigo, Nicaragua-wood, orchil, pokeberry, potash, quercitron, red beet, red cabbage, red carrots, saffron, sanders-wood, turmeric, whortleberry.

In all, in both lists, just fifty. There are more, however. But that’s enough. Now then, my friend, what did you drink this morning? You called it Bourbon, or Cognac, or Old Otard, very likely, but what was it? The “glorious uncertainty” of drinking liquor under these circumstances is enough to make a man’s head swim without his getting drunk at all.

Actually the list is quite interesting, because although some of those are definitely scary things to have in your food, like sulphuric acid, lead, turpentine and tobacco, others are still used as food additives, like annatto, burnt sugar, and cochineal. Although there shouldn’t actually be any need to add extra colour to things like bourbon and stout. And some of the additives are normal ingredients in gin, like orange peel, coriander, liquorice, and grains of paradise.

» The beetle is a caricature of P.T. Barnum.