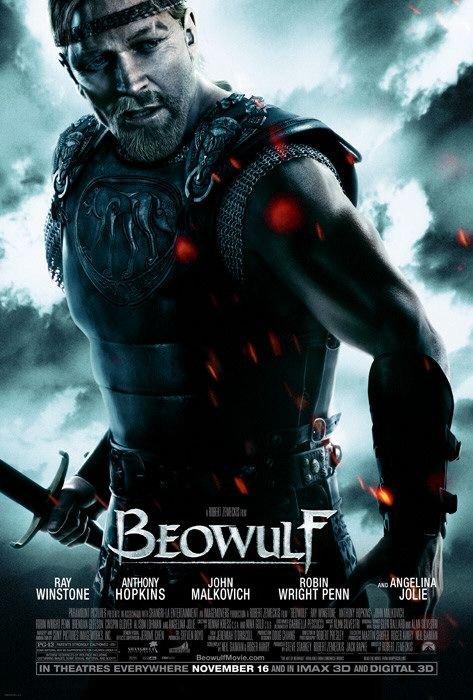 A big-budget Hollywood version of Beowulf is obviously going to either be a travesty of the poem or commercial suicide.

When you hear that Angelina Jolie is embarrassed about her nude scenes in the movie, I think it’s pretty clear which one.

I’m just reading Nonzero: The Logic of Human Destiny by Robert Wright, a book which argues that there is in fact a good theoretical basis (from game-theory) for seeing the development of human societies as directional. I believe the book later goes onto biological systems as well, but I haven’t got to that bit. Anyway, it got me thinking about Beowulf again.

Beowulf, and other A-S poetry, always read as curiously foreign. Obviously, even the date of the manuscript – C11th – *is* a very distant and foreign culture, and if you accept the C8th date for the poem, that pushes it back further. The action of the poem is dateable to around 516 (the death of Hygelac), although assuming much continuity between the events and the writing of the poem, let alone in its surviving copy, seems unwise.

Still, even given the distance between the poem and ourselves, it always seems surprisingly foreign; much more so than Roman literature, and more so, or at least very differently so, than later medieval literature as well. The insight I may or may not have gained from the Wright book is that part of that difference is because of a major shift in the very structure of the society. He traces out a sequence of societal structures, apparently as used by archeologists (from memory): family groups -> Big Man societies (i.e. a village or two loosely organised around a charismatic leader) -> chiefdoms (groups of villages lead by a powerfully authoritarian leader who often claims divine authority) -> states (centralised bureaucracy, well-defined legal structures).

The relevance of all this is that the world of Beowulf seems to fit more into the chiefdoms stage, which was characterised by, for example, one central village growing in authority and size amongst others around it, and tellingly for the Beowulf comparison, the increasingly lavish burial ceremonies surrounding the deaths of chiefs. Wright mentions the megalithic cultures in pre-Roman Britain as an example; obviously, the ship burial and the barrow burial in Beowulf seem like the same thing. Another key feature – both the Big Man cultures and chiefdoms are often characterised by the throwing of great feasts by the leader as a way of both redistributing wealth and establishing their own status, and feasting is obviously a very A-S obsession. The directness of the relationship between the ‘king’ in A-S poetry and his duguth/geoguth, and the gift culture, also feel like part of a rather smaller social unit than what we normally think of as a ‘kingdom’ (although chiefdoms could be quite big – and is it so different from the emphasis on feasting in ME poetry? And the Tudor court?).

It’s not the first time I’ve thought about this. I was struck, some years ago, by something (in Guns, Germs and Steel, maybe?) which said that the first thing Papuan tribesmen do when they encounter someone they don’t know is have a long discussion about who their relatives are – because if they can find a relationship to each other, they probably won’t need to fight. That reminded me forcefully of sequence of rather cagey encounters B has – initially with the watchman, then a courtier, then the king (I think) – when he first arrives at Heorot as a stranger. And reading the Haida poetry recently, the image of the big houses with a central firepit and a poet/storyteller/scop telling stories that could last for hours, was also reminiscent of A-S poetry.

I don’t suppose any of this would come as news to an anthropologist, but then such is academic territoriality, everything I read about Beowulf at uni was written by literary critics – or sometimes historians. And what does it matter anyway? Well, it changes the way I visualise the poem, at least. The vocabulary, of kings and earls and thanes, never quite matched to the action, but it’s so seductive that somehow it’s hard to get away from it. To think of Hrothgar as a tribal chief, and Heorot as something closer to a longhouse than a palace, carries a severe risk of going too far in the other direction – they may have had simpler political units, but they weren’t exactly hunter-gatherers. Still, it’s a useful imaginative antidote to all the baggage carried by the word ‘king’.

All of which assumes that the poem is somehow a true reflection of society in Northern Europe in the 6th? 8th? century. And since it was written down in the C11th by a Christian scribe, probably from a copy of a copy, that may be a mistake. How much of what’s in the poem is more modern stuff that’s been imposed? And it’s quite likely that the late Anglo-Saxons had a romanticised view of their forebears anyway. The Morte D’Arthur tells you more about the C15th century, when it was written, than the pre-Roman society where it was nominally set; or perhaps the C15th’s romantic view of an earlier medieval period.