I’m actually surprised that I’ve spent three years trying to read a book from every country in the world without any new countries being created… but it looks like that’s about to change. Kosovo seemed like the favourite to join the list, but it looks like South Sudan have beaten them to it. 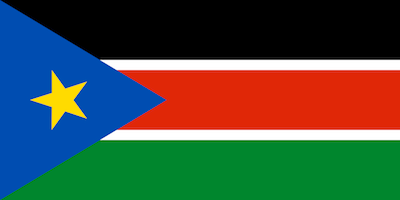 They’re not quite members of the UN yet, but they’ve been recognised by Sudan and the UN, so presumably it’ll be a relatively quick process.

Given the appallingly brutal recent history of Sudan, I’m not about to begrudge them a peaceful separation, but I don’t think it’s going to be easy to find a South Sudanese author to read. Ho hum.

» The flag of South Sudan is taken from Wikipedia.

Season of Migration to the North is my book from Sudan for the Read The World challenge. Originally published in 1966, ‘in 2001 it was selected by a panel of Arab writers and critics as the most important Arab novel of the twentieth century’. I didn’t really know anything about it before I started reading, and expecting it to be set entirely in Sudan, I was slightly startled by the amount of London in it. It is narrated by a man who is returning to Sudan after seven years studying in Europe; when he comes back to his home village, he meets a stranger called Mustafa who also, it turns out, spent many years in London.

It is very much a culture clash novel, exploring Mustafa’s experience, firstly in London as an outsider figure who plays up his exoticism to attract women, and then a different kind of outsider after he has returned to Sudan and is living as a farmer among people who know nothing about his background. The London sections are not too different from what you might find in a mid-C20th English novel; I was more interested in the Sudan stuff. I do appreciate there’s an irony in reading a book about a man who trades on his exoticism and then complaining, effectively, that it’s not as exotic as I was expecting; but there it is. It is quite intriguing to read a novel about English society with the ‘exotic’ character at the centre, though — I’m sure I’ve read a few novels by British writers from early-mid C20th with Mustafa-type characters turning up on the periphery. Not that I can think of specific examples offhand.

Most important Arab novel of the century? I wouldn’t know, although as I say, it reads to me like a fairly conventional novel of the period. A good novel — extremely good in parts — but it didn’t blow me away. But then I don’t think the novel is exactly a traditional part of Arab culture, so it may have been more radical in its context.

» The two pictures — Kadugli – Dilling Provincie Kordofan and West Nuba Mountains — are both © Rita Willaert and used under a CC by-nc licence. They don’t have any very precise connection to the book but they were taken in Sudan and I liked them. There are lots more where those came from.