A little black thing among the snow,
Crying ‘weep, weep’ in notes of woe!
‘Where are thy father and mother? Say!’
‘They are both gone up to the church to pray.

‘Because I was happy upon the heath,
And smiled among the winter’s snow,
They clothed me in the clothes of death,
And taught me to sing the notes of woe.

‘And because I am happy and dance and sing,
They think they have done me no injury,
And are gone to praise God and his priest and king,
Who made up a heaven of our misery.’

I always think of Blake as one of a triumvirate of great London writers, along with Dickens and Pepys. There are plenty of other poets with impeccable London connections: Chaucer, Donne, Pope, Keats and Browning, just to pick some of the obvious ones. Hell, you could throw in Shakespeare at a pinch.

And you could hardly claim Blake as a typical Londoner. I mean, the revolutionary politics was common enough at the time; as a matter of fact, in his day job as an engraver/printer, Blake did one of the illustrations for a book by another C18th poet and radical I wrote about recently, Erasmus Darwin. And London has had its fair share of esoteric and peculiar religions, so that’s not too unusual. But Blake saw visions; as a child, he saw the head of God outside an upper-storey window in Soho, and a tree full of angels on Peckham Rye. 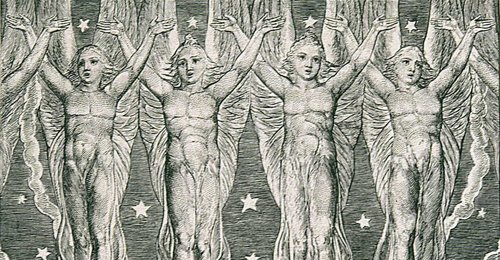 It is that combination, though, which is the point: Blake walked the filthy, stinking, noisy streets of London, and found the transcendent. He saw it as a place of poverty, tyranny and oppression, of mind-forged manacles, but he also saw it as something more and stranger.

Hampstead, Highgate, Finchley, Hendon, Muswell Hill rage loud
Before Bromion’s iron tongs and glowing poker reddening fierce.
Hertfordshire glows with fierce vegetation; in the forests
The oak frowns terrible; the beech and ash and elm enroot
Among the spiritual fires. Loud the cornfields thunder along
The soldier’s fife, the harlot’s shriek, the virgin’s dismal groan,
The parent’s fear, the brother’s jealousy, the sister’s curse,
Beneath the storms of Theotormon; and the thund’ring bellows
Heaves in the hand of Palamabron, who in London’s darkness
Before the anvil watches the bellowing flames. Thundering
The hammer loud rages in Rintrah’s strong grasp, swinging loud
Round from heaven to earth, down falling with heavy blow
Dead on the anvil, where the red-hot wedge groans in pain.
He quenches it in the black trough of his forge. London’s river
Feeds the dread forge, trembling and shuddering along the valleys. 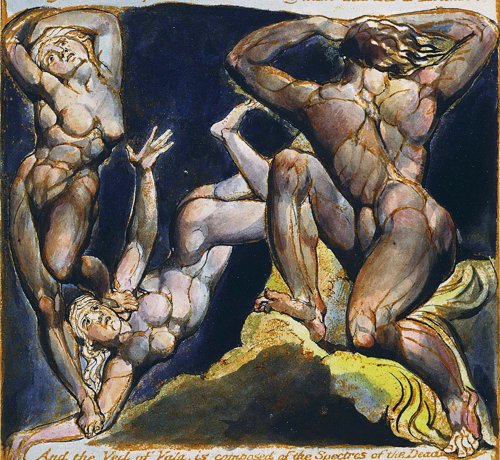 That passage, and the illustration, are from Jerusalem: The Emanation of the Giant Albion. It’s hard to know what to make of these long prophetic poems. I can only take them in small doses, although they contain some brilliant moments. Is their strangeness best understood as a radical artistic statement, which would make them comparable to, say, Walt Whitman; or do they reflect Blake’s weakening grip on reality? Was he insane? Does it matter?

It is an odd thought that Blake published the first of his prophetic poems, The Book of Thel, in the year of the Regency Crisis, while George III was being confined in a strait-waistcoat and kept away from sharp objects a few miles up the river at Kew. Considering how the King was treated in his illness, Blake did well to keep out of the hands of the doctors.

There is a famous story that one of his friends once arrived at Blake’s house in Lambeth to find him and his wife sitting naked in the garden reading Paradise Lost aloud to each other. The friend was embarrassed, but Blake called out, ‘Come in! It’s only Adam and Eve, you know!’ Perhaps the King would have envied such freedom.

» all the pictures are by Blake and are taken from the extraordinarily comprehensive William Blake Archive.

3 replies on “Did he who made the lamb make thee?”

Hey, thanks for the reminder! I’ve always been a huge fan of Blake – or at least those portions of his work that I find readable. I don’t think that he was any more insane than J.R.R. Tolkein, or any other writer of speculative fiction.

Tolkein is an interesting comparison. And of course Milton was a direct influence, as well as Blake’s religion. I suppose if it wasn’t for the stories of the visions and visitations throughout his life, it might not occur to anyone to suggest mental illness, but even so I think the epic poems have a kind of obsessive quality to them. I think people are sometimes reluctant to accept the idea that Blake was mentally ill because it seems to devalue his work: he has to be either a madman or a genius. I can’t see why he shouldn’t be both.