I was considering what it was about that weird political letter that made me put in the effort to blog it. I think it’s two things, really. The first is that we are increasingly surrounded by the mass produced and mechanically produced, and I find amateur, hand-made things more and more appealing. Of course, even a hundred years ago, people lived their lives surrounded by mass-produced stuff, but as technology improves, more and more things can be done by machines. It’s now rare to see a hand-painted shop sign, for example. Concert flyers, fanzines, even posters about lost cats, have usually been run up on someone’s computer, and have the generic similarity that comes from everyone having the same few typefaces and little idea about how best to use them. 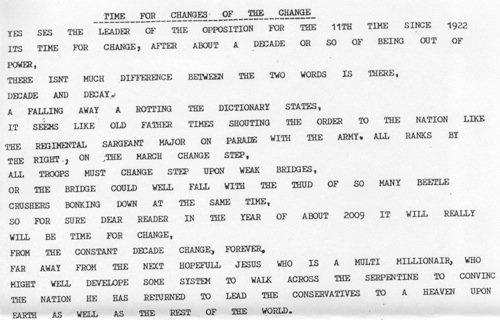 It may seem slightly odd to be talking about the handmade in the context of a letter which is typewritten, photocopied, and stapled together, but I guess ‘hand made’ is sort of relative: each technology looks laborious and hands-on in the light of the next one. Hell, even things from the first generation of home printing look that way: I got a flash of nostalgia the other day because there was a sign in the optician’s window printed in Algerian.

The other thing about the letter which caught my attention, I think, was that slight whiff of paranoia to it. I think there’s an incredible pathos to these public displays of paranoia, not least because they are often superficially quite funny, like the killed by freemasons guy, or the graffiti that appeared at Charing Cross reading

ARE THEY Putting
Nanotechnology in your
Food & Water?

STOP THEM EXPERIMENTING
ON Benefit
Claimants
&
The Mentally
ill

I once stumbled on an internet discussion forum for people who believed they were being spied on by the US government: it was about the saddest thing I’ve ever read, but the sheer bizarreness of the delusions just seemed to be crying out to be made a joke of.

My letter-writer isn’t quite so clearly suffering from paranoid delusions as those cases, but still, distributing anonymous political tracts by hand, asking people to pass them on, to write to the queen and ask her to dissolve the political system as the last chance to save the country: I’m pretty sure that inside this person’s head is not a happy place.

4 replies on “That letter”

Thanks for posting this. I love stuff like this.

Good! I wasn’t really sure who I was posting it for, to be honest, so I’m glad someone liked it.

A CHIME: I loved that post as well, Harry–I went painstakingly through the whole flickr set. (I meant to comment, but the post had already slipped down the page.) Please tell us if you get more!

I have visions of the writer methodically working his way through the A-Z trying to put a copy through every door in London, rather than paying me a repeat visit, but who knows. Glad you liked it :)