Just another thought that occurred to me while I was cooking this the other day: 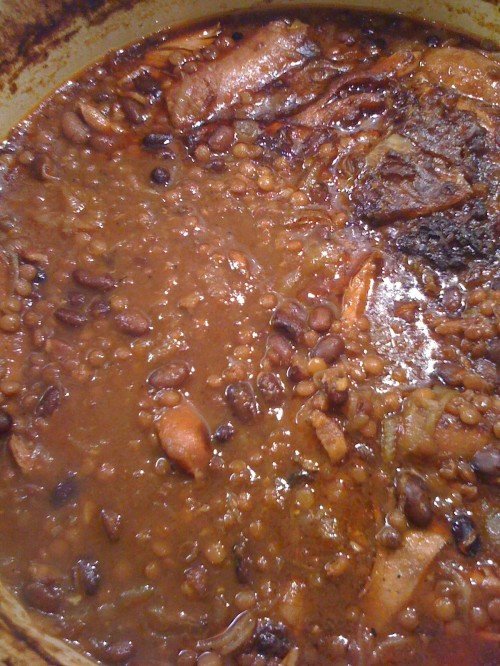 I’m always annoyed by the way they present food products in the style section of the Sunday paper: a stylish-looking package of olive oil/chocolate/wine floating in white space to tempt shoppers as though it was a new pair of shoes or some face cream. Or those terribly precious delicatessens with largely empty shelves which just have a few products artfully arranged as though they were Fabergé eggs rather than, for example, eggs.

It’s not the cost — I’m not averse to spending money on food — it’s the suggestion that good food is just a style issue. Which is kind of ridiculous. For example, Spanish food has been a bit trendy over the past couple of years in London, and so people who care about such things are perhaps more likely to buy Spanish Iberico ham where before they would have bought Italian prosciutto. And why not, it’s a great product. But there’s nothing new about it. It is made in the same way as ham has been made over half of Europe for hundreds of years. It may be new to us, but it is the most traditionally produced product imaginable, the antithesis of fashion.

So what’s the significance of the [delicious if not very photogenic] gloop? Well, it’s a sausage casserole. And sausage casserole is, for me, a dish very much associated with bad student cooking: cheap sausages, too much tinned tomato, big lumps of random vegetables. My sausage casserole was made with Toulouse sausages and chorizo, a mixture of brown lentils and black beans, a jar of Spanish tomato and red pepper sauce, all backed up with lots of onion, celery, garlic, bacon, fresh herbs, and stock made with the carcass of a roast organic chicken and a pig’s trotter for extra oomph. It’s somewhere between a cassoulet and a feijoada. But it is still, really, a sausage casserole. The difference is that I am a better cook than I was back then, using better ingredients and making better use of them.

My personal tiny epiphany about this came when I was looking through an Italian cookbook and found a recipe for polpettone. You take minced beef, mix in some onion, herbs, garlic, chopped salami, milk-soaked breadcrumbs and grated parmesan, press it into a bread tin and cook it in the oven. In other words, it’s meatloaf. But up until that point I had entirely associated meatloaf with blue-collar American cooking of a, umm, not very aspirational kind. In the sitcom Roseanne, she was always cooking meatloaf, and I’m sure I’ve seen it used elsewhere in US popular culture as a signifier of social class. But seeing it in an Italian cookbook with an Italian name made me look at the recipe and think, you know, that actually sounds rather delicious. And it was. My preconceptions about meatloaf were simple snobbery.

Maybe there are some dishes which are genuinely just a bad idea, but which were inexplicably popular at some time or other. But generally, no matter how old-fashioned or déclassé or boring you think a dish is, if you make it carefully and thoughtfully with good ingredients it will be delicious.

[The first two parts of Everything I Know About Cooking, I Learnt From Making Stew are here and here.]

3 replies on “Everything I Know About Cooking, I Learnt From Making Stew (addendum)”

I make meatloaf with venison quite a lot. And sometimes with tofu, too. South African bobote is worth exploring if you want a want a more exotic meatloaf. It involves lots of caramelized onions, curry spices, and apricot, and is topped with a thin custard.

“It involves lots of caramelized onions, curry spices, and apricot, and is topped with a thin custard.”