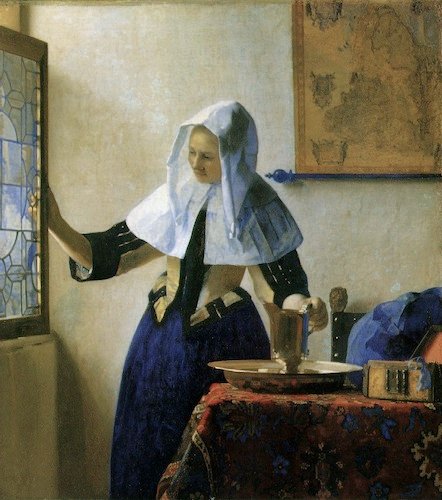 7 replies on “Why I hate the Pre-Raphaelites*”

I’m not a particular fan of either of those two, but I certainly find Ford Madox Brown’s paintings of contemporary subjects a lot less annoying and more interesting than the archetypal Pre‑Raphaelite stuff. Holman Hunt I have less time for, whatever he’s painting.

The argument is a bit simplistic, I’ll admit, especially given the number of different artists involved. Whether what’s really bothering me is a purely Pre‑Raphaelite thing, or a Victorian thing, or even a broader idea of a kind of fantasy sensibility… to tease out all the nuances properly would take a whole book rather than a blog post. If I managed to articulate them at all.

Blog post or not, it’s still a place for criticism, and responses such as these. I’m happy people are at least writing about art and know some of the names.

I like very much what you say about Vermeer. The sensuality with which he translated surfaces into 2D is almost painfully pleasurable.

To my knowledge Ford Madox Brown was the only pre-raph who created anything of any substance and insulted by his inclusion in the group. The rest, to my knowledge, produced vapid nonsense. The main body of work seems to lie still born on the support. I understand the foolish truism that something so hated must have something to it. Here it really is just rubbish and dangerous rubbish because it is rallying point for the philistines who are dangerous because feel themselves aesthetes. It makes me think of Una Stubbs cooing over that other bit popular philistinism, that wretched late Dali crucifixion.

the Pre-Raphs were the Patrick Nagel of their day.