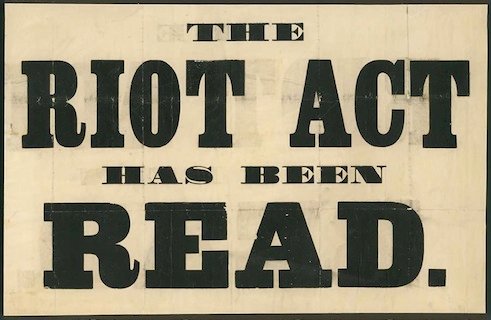 Right on. I have myself engaged in acts of petty vandalism while drunk, and have experienced the intoxication of being part of a mob. But I can’t say I’ve ever looted or pillaged on a large scale like most of these self-righrteous politicians. The gentleman doth protest too much, methinks.

I’ll say at the outset that from here in Westpond Flyoveria, few if any anticipated the riots. Certainly not I! But considering after the fact, Mr. Cameron is wrong.

Britain appears, from here, to have essentially discarded the entire notion of “retributive justice”. People who do bad things are not punished; they are understood and given therapy and support. It all rather reminds one of the joke about the two social workers who came along just before the Good Samaritan. Looking at the victim lying there bleeding, one says to the other, “O dear! The poor fellow who did this needs our help!”

But the entire edifice of Social Justice, to which you and most of the British visible to me appear to subscribe, is utterly dependent upon retributive justice. The Haves are Bad People, because if they were Good People they would give what they Have to the Have-Nots. Since they are Bad People, retributive justice punishes them for Having by taking what they Have away.

The rioters perceive two failures: if they do Bad Things they will not see retributive justice (“punishment”) visited upon them — and there before them are masses of Haves who are not punished by taking what they Have away.

A society in which there is no possibility of retributive justice will invent its own, eventually reverting to the essentially-tribal system of revenge and reprisal. Along the way of that development, there will necessarily be occasions when, as here, the People take matters into their own hands. Those caracoling in the streets note that there are those who Have, e.g., large-screen plasma TVs, while they themselves Have-Not, and take it upon themselves to visit retributive social justice upon the Haves, as their ideals require. They are thus properly not “rioters” or “protesters”, but vigilantes.

‘Britain appears, from here, to have essentially discarded the entire notion of “retributive justice”. People who do bad things are not punished; they are understood and given therapy and support.’

Given how expensive it is keeping people in prison, I kind of wish this was more true… but actually the UK sends more people to prison than almost any country in Europe. Admittedly that’s still far less than the US, but then the US criminal justice system is obviously dysfunctional.