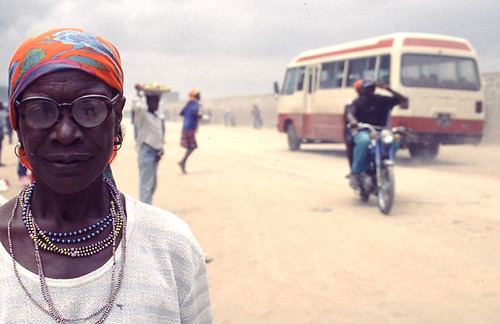 Argentina played the most beautiful football yesterday in thrashing Serbia and Montenegro. That’s the kind of play that you watch the World Cup to see – great individual flair combining in a great team performance. Great goals, great skills. It was like a highlight reel. The only thing it lacked to be a true all-time classic was a great opposing team.

You don’t win the World Cup by playing beautiful football in the group stages, of course. No team produces that kind of quality every time they play, and they’ll face tougher opposition. For the time being, you just have to watch and marvel and take joy in the moment.

I also enjoyed watching Angola scrap out a 0-0 draw with Mexico. We’re always told that Americans will never accept football because it’s too low-scoring and they won’t watch sports that end in a draw; and to be fair, it’s not a lot of fun watching a scoreless draw between Fulham and Middlesborough. But on the right day, between the right teams, 0-0 can be a brilliant and exciting result.

And I always like to see the African teams doing well. There aren’t many circumstances in which African countries get to be portrayed in a positive light, let alone compete with the world’s richest countries as equals, but football is one of them. The great African players – Eusebio, Weah, Eto’o – are legends. The assumption always seems to be that an African team couldn’t win the whole tournament, and there’s not (yet) an African footballing superpower to compete with Brazil, Argentina, Italy and Germany, but over the past few World Cups, they’ve consistently produced at least one team that has mounted a serious challenge. And as more and more African players play in the top European leagues, they’re only going to get better. Who knows what they would have achieved already if so many of their countries weren’t having to deal with poverty, corruption and war.

The consensus seems to be that this time, the best teams in Africa haven’t made it to the World Cup, and that the two strongest teams, Ghana and Ivory Coast, were very unlucky in the draw for the groups. So probably this isn’t their year. But as long as they’re in the competition, I’ll be cheering them. Against everyone except England, obviously.

EDIT:Hooray for Ghana, who just whupped the Czechs. That was such a fun game to watch. If they play like that again I’d certainly back them to beat the USA in their third group game, which would probably mean they qualify for the knock-out stages.

I was thinking the other day that it’s surprising and slightly disappointing that, while London is covered in England flags for the World Cup, you don’t see many flags from other countries. Something like 25% of people resident in London were born outside the UK, so there must be plenty of people supporting just about everywhere.

But I went to a friend’s house in Oval yesterday. Oval is ‘Little Lisbon’, the Portuguese centre of London, and Portugal were playing their first World Cup game that evening against ex-colony Angola. Everywhere were people wearing Portugal shirts, or the Portugal strip, or Portugal scarves, or waving the Portuguese flag. It was great. There was even some banter between Angolan and Portuguese fans on the bus (at least I think it was banter, but I don’t speak Portuguese).

I love that. I loved the fact that when South Korea won some key match at the last World Cup – beating Italy maybe? – hundreds of Koreans turned up in Trafalgar Square singing and waving Korean flags.

I suppose a comment about England’s first game is in order. it wasn’t that encouraging, let’s be honest. But we got the three points; we’re clear at the top of the group; it’s a marathon not a sprint; it’s a game of fourteen halves; it’s still a while until the fat lad sings.