I do enjoy the LFF: interesting films, cinemas full of largely well-behaved audiences, and no ads or trailers. I went to five films this year, this is what I thought of them. Obviously.

An Italian film about a Naples fishmonger and petty criminal who becomes dangerously obsessed with appearing on the reality show Big Brother (or, strictly speaking, Grande Fratello). It’s funny and odd and well acted, and it looks terrific, with Naples providing a backdrop of decayed grandeur. I wasn’t completely convinced by the ending, but overall I thought it was really good. 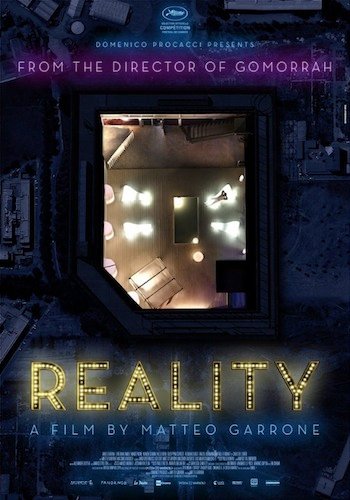 A film about a hugely popular model with a dark secret: her looks are entirely produced by a radical, dangerous form of plastic surgery. On one level it’s a satire, but it does the classic exploitation movie thing of supposedly decrying our cultural obsession with youth and beauty while the camera lingers lasciviously on the face and body of the star.

The messaging is clunkingly heavy handed, and it’s stylistically and tonally very uneven, but it was good salacious fun. Personally I think it needed to be even more unapologetically salacious and exploitative; you could surely cut half an hour of the more ponderous stuff to give a tighter focus on the sex, violence and body horror.

A Senegalese film about a man who, for reasons which are never explained, knows that he is going to die at the end of the day. Someone has seen it in a vision or something, and it’s somehow an honour, but it’s never made clear: all we know is that he’s not going to wake up the next morning. I don’t know whether this is a cultural trope that a Senegalese audience would find familiar, or if it’s intended to be as strange as it seems to me.

The film is then about what he decides to do with his last day; some of it mundane, some parts more profound, and all of it freighted with extra significance. Odd but quite effective.

The film of what must be Salman Rushdie’s most popular novel, if not his most famous (somehow I don’t think that one is going to be made into a film any time soon).

It started off well, but lost me along the way. It’s a big fat complicated novel that takes place over multiple generations, and the film failed to hold it all together. It didn’t help that for much of the film, a lot of the heavy lifting is being done by child actors. And because the lives of these children, born at the moment of Indian independence, are supposed to parallel modern Indian history, we get that history explained to us with big dollops of expository voiceover.

Overall, though, it just seemed a bit one-paced. And considering the richness of the original novel and the fireworks of Rushdie’s prose, it was just a bit tame and conventional. Perhaps it was a mistake for Rushdie to write the script himself, or perhaps it needed a different director.

Village at the End of the World

An Anglo-Danish documentary about a village in Greenland. It’s a brutal environment, and life is marginal at the best of times, but also they are dealing with the closure of the small fish-processing plant that was their main source of income, and global warming is making the ice treacherous for hunting in winter.

It’s funnier and warmer than that makes it sound, mainly because they found some great characters. And it helps that it just looks amazing: bleak but beautiful, glowing in the summer, and of course completely dark in winter, with just the windows lit up against in the night.

It’s partially an environmental documentary, and partially a film about tensions between tradition and modernity, and a record of a life that will no doubt be very different, again, in a few years time. But above all it’s beautifully made and enjoyable to watch.

Commenting on the current controversy surrounding Celebrity Big Brother and a bleeped-out word spoken by one of the contestants, the Telegraph printed this remarkable sentence:

Channel 4 was quick to clarify that Jack had referred to Shilpa as a ****, not a ‘paki’.

Channel 4 being a bit too clear for the delicate sensibilities of Telegraph readers there. Note that ‘paki’, which, by implication, is the more taboo word, is left en clair. Although to be fair, ‘Jack had referred to Shilpa as a ****, not a ****’ would be even more bizarre.

For more fun with taboo vocabulary, check out the Language Log, where they’ve conveniently compiled a list of posts on the subject. You might want to start with this one.

Oh, and if you were wondering: ‘cunt’.