Grayson Perry has curated an exhibition at the British Museum that combines his own work — ceramics, textiles, ironwork — with objects from the museum collection. Which must have been *the most fun ever*. I mean seriously, I’ve spent hours browsing the BM’s collection online, looking for things to post to Tumblr, but how much more fun to actually wander around the stores, talking to the experts, poking around in drawers and cabinets, and actually handle everything, with an open-ended brief to find anything which is beautiful, or interesting, or funny. 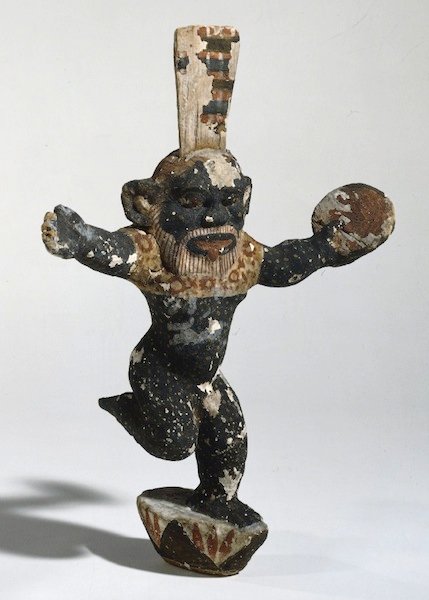 In fact, if it had just been stuff from the collection with some commentary from Perry, that would be enough to make a very interesting exhibition, because he always writes well and interestingly about art and he clearly has an excellent eye.

But the inclusion of his own work does work well. His work always combines a seriousness with humour and absurdity, and its presence affects the way you look at the other objects. Human beings often are absurd, after all, and museums aren’t always the best places to bring that out. For that matter, museums don’t always do seriousness very well. I mean, they’re good at dry, academic seriousness, but they don’t necessarily create the environment for human seriousness.

And in turn it gives you some insight into how he sees his own art to see the things he’s chosen to show alongside his work, and the themes he arranged the exhibition around: pilgrimage, magic, sexuality, maps and so on. And since I haven’t said so explicitly yet: Perry’s work is interesting and attractive in its own right.

So, yeah, a playful, entertaining exhibition full of striking, interesting and beautiful things. Go and see it.

» The image is of a painted wooden figure of a dancing Bes holding a tambourine, standing on a lotus. It’s Egyptian, from about 1800BC. It is from the BM, but it wasn’t in the exhibition.

I went to see Crafting Beauty in Modern Japan at the British Museum last week.

The exhibition presents works by members of the Japan Art Crafts Association (Nihon Kōgeikai), many of them designated ‘Living National Treasures’ in Japan, a title conferred by the Japanese government on exemplary individuals who carry on Japanese traditions.

In other words, it was lots of contemporary – or at least C20th – Japanese ceramics, kimonos, lacquer, metalwork and so on. There’s a wide range of techniques on display; the ceramics include stuff which is artfully rough-hewn as well as things which are finished to within an inch of their life; the kimono fabrics are a mix of tie-dyed, woodblock-printed, embroidered and woven. I didn’t find the items on display universally covetable; many were just not to my taste. Many of them wouldn’t have particularly stood out in a jumble sale, to my ignorant eye. I don’t think the lighting helped, mind you; it was perfectly competently lit, but I think most of them would have benefited from natural light. Others were absolutely gorgeous.

The things that appealed most to me were the lacquer and the woven kimonos. I find lacquer an incredibly tempting material; I can’t see it without wanting to pick it up and stroke it. Even just the plainest matte red and black lacquer rice bowl is a delight; I wish now I’d picked one or two up when I was in Japan, but the good ones seemed so expensive that I didn’t. The woven kimono fabrics were made with a technique called kasuri, which is the Japanese name for what I would usually call ikat. That is, the threads are tie-dyed in advance so that they form a design when woven together. Because the colour on the threads never quite lines up precisely, it forms soft-edged patterns which I find very attractive. They were mainly dyed with indigo for that classic blue and white Japanese look.

The BM website doesn’t offer any photographs, so I can’t easily illustrate any of my prejudices, but this website devoted to Japanese pottery and this virtual museum of traditional Japanese craft have plenty of pictures of the sort of thing in the exhibition. Those sites also demonstrate that even a passionate interest in visual arts doesn’t necessarily get carried over into web design. This tea bowl is from the second of those sites:

Generally I’m slightly ambivalent about the Japanese attitude to art and craft. One is always told that the Japanese make no distinction between the two; and in some ways I find that a deeply admirable attitude. What’s great about it is the value placed on the making of beautiful things. Not just that there is a cultural and monetary value placed on beautiful objects, but that the job of making them is treated as a serious and important business. Curiously enough, I think the closest analogue in Western culture is the respect given, not to craftsmen, but to designers – Christian Dior, Charles Eames, Charles Rennie Mackintosh, Hermann Zapf – who, if not exactly household names, are still remembered in a way no hands-on practitioner is. Not that the craftsmanship of the Japanese is at the expense of being designers; they are more like designer-craftsmen in the William Morris tradition. To some extent they are even descendants of that tradition, since Morris was surprisingly influential in Japan.

I think we should all hope to live our everyday lives surrounded by well-designed and well-made things, and one part of achieving that is giving due respect to the people who design and make them. So I think that is a Good Thing. My ambivalence about it arises from the fact that actually I do think there is an important distinction between design and art. I don’t think that an earthenware sake jug, however exquisitely glazed, has the potential to be a great artwork in the same way as a Rembrandt or an El Greco. When I was living in Japan I went to few galleries of Japanese art, and a few exhibitions of ceramics, and I saw some lovely things; but I tended to think that flip-side of granting importance to craftsmen was a tendency to reduce the likelihood of producing an El Greco. All art seemed to be pitched at the level of the decorative arts. I’m wary of expressing that sentiment, because I know I’m an outsider with an extremely superficial knowledge of Japanese culture, and I think of the beautiful work of Hokusai and Hiroshige which would seem to cast doubt on my theory, but that’s how I felt.

The other slight concern is the essential conservatism that the attitude can produce. Not that Japanese culture has any shortage of modernity; but it can seem a little schizophrenic. There’s a risk that the admiration for design and craftsmanship in something like a kimono gets put into a tidy mental compartment and held separate from the manufacture of MP3 players, kettles and apartment blocks. I guess though that that tension between tradition and innovation is a separate issue, really; the important thing is to value well-made, beautiful things and not to treat them as disposable.

Anyway, I’d recommend the exhibition. And if you’re visiting the British Museum for any reason, I’d suggest having lunch at Bi-Won, a Korean restaurant on the intersection between Coptic Street and New Oxford Street. It’s very reasonably priced, the food is tasty and it’s very close to the museum.

Flickr set of the week is How To Make Paper by B_Zedan. There’s a whole 41 picture set showing the process in stages, so here’s just one of them. 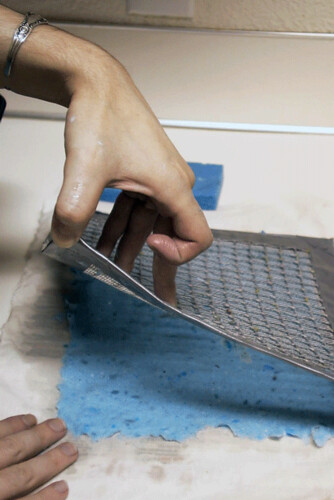