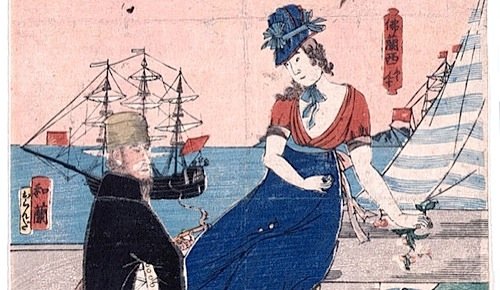 I just read Big Chief Elizabeth – How England’s Adventurers Gambled and Won the New World, by Giles Milton. As the title suggests, it’s an account of the earliest attempts to set up an English settlement in America. As the title also suggests, the general tone of the thing is ‘rollicking yarn’ rather than ‘nuanced and careful investigation into the ethics of colonisation and colonialism’.

That’s fine by me. I refuse to feel any ancestral guilt over anything countrymen of mine did over four centuries ago. Or indeed feel any ancestral outrage over things done to them, since there seems to have been plenty of brutality on all sides.

I was slightly startled to realise how little I knew about the subject. In a curious way it’s become part of American history rather than British. Not that gaps in my historical knowledge are so unusual they need a special explanation.

Odd how hard it is to shift the idea of the Elizabethan period as glamorous. I mean, the clothes were pretty fab, and there was Shakespeare of course, and pirates and gold and stuff, but Elizabeth was just another capricious despot in a string of despots.

Sir Walter Ralegh features heavily, of course. Which seems as good a reason as any to post a favourite poem.

As you came from the holy land
Of Walsinghame,
Met you not with my true love
By the way as you came ?

How shall I know your true love,
That have met many one,
As I went to the holy land,
That have come, that have gone ?

She is neither white nor brown,
But as the heavens fair ;
There is none hath a form so divine
In the earth or the air.

Such a one did I meet, good sir,
Such an angel-like face,
Who like a queen, like a nymph, did appear,
By her gait, by her grace.

She hath left me here all alone,
All alone, as unknown,
Who sometimes did me lead with herself,
And me loved as her own.

What’s the cause that she leaves you alone,
And a new way doth take,
Who loved you once as her own,
And her joy did you make ?

I have loved her all my youth,
But now old, as you see,
Love likes not the falling fruit
From the withered tree.

Know that Love is a careless child,
And forgets promise past ;
He is blind, he is deaf when he list,
And in faith never fast.

His desire is a dureless content,
And a trustless joy ;
He is won with a world of despair,
And is lost with a toy.

Of womankind such indeed is the love,
Or the word love abusèd,
Under which many childish desires
And conceits are excusèd.

But true love is a durable fire,
In the mind ever burning,
Never sick, never old, never dead,
From itself never turning.