This is my book from Kazakhstan for the Read The World challenge, and it is, unusually, contemporary literary fiction (from 2010!). Which would be even more unusual if it had actually been translated from Kazakh or Russian, but it’s a novel in English by a Kazakh immigrant to the US. And the action moves between Los Angeles — where Aidar, a Kazakh man, lives with his American musician wife and son — and Almaty where his mother lives. 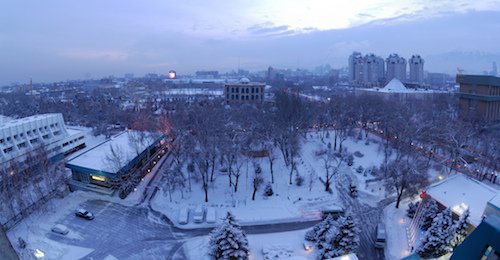 [SPOILER ALERT, I guess; the event mentioned happens pretty early in the book, but if you don’t want to know the result, look away now]

The full title of the book is Almaty-Transit — A Ghost Story, and most of the action happens after the death of Aidar, when his spirit finds itself back home in Kazakhstan, but wanting to find some way to help his wife and child back in the States. It’s hard to give any more detail without getting even more spoilery, but I would say that for much of the book the supernatural part is handled well, and it seems like an extension of a character-driven narrative, rather than wacky stuff happening just to try and make the book more interesting. By the end, as the supernatural elements got more elaborate and more gothic fairy-tale in tone, I was starting to get a bit impatient with it, but it wasn’t enough to spoil the book for me.

So, yeah, on the whole I enjoyed this, I thought it was well-written and the characters were engaging, even though the thing which is most distinctive about it — the supernatural side of the story — was in some ways the least appealing part, for me.

»The photo Almaty City is © Vladimir Yaitskiy and used under a CC by-sa licence.