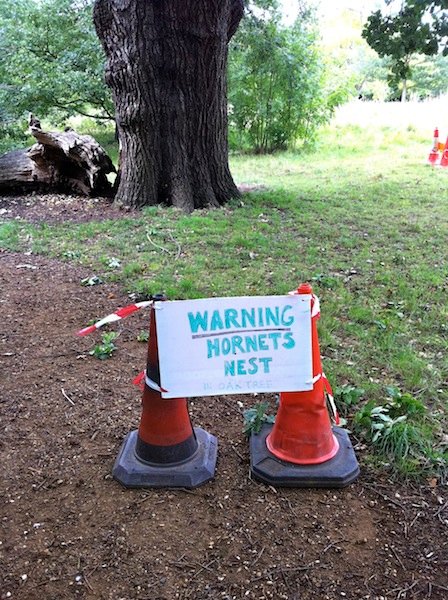 I saw one of these parasitic wasps in the garden… Because it was long and thin with a light tip to the ovipositor, it looked sort of like a small, delicate blue-tailed damselfly when it was flying around the flowerbeds.

Honey, of course, is made by bees
but some may not have heard
about the hives of Cornish wasps
that make the lemon curd.

a bit late, but at least I’m back to only one behind schedule.

Sherry mentioned my wasp nest on her blog and via the comments was revealed this hand-made hornet’s nest by papermaker Gin Petty. You can read her full account of making it here.

And browsing around Flickr I found these pictures by Andrew Dill of a wasp nest built on a window:

Here’s something I learned today. ‘Hymenoptera’ (i.e. bees, wasps and ants) are not called that because of all those virgin workers, as I’d always vaguely assumed. Rather it’s

Which perhaps I should have realised, since Hymen wasn’t god of virginity but marriage.

And here’s a good word: haplo-diploid.

We finally had enough sun to make photography a bit easier. Here’s another wasp nest close-up. It’s striking how different the colours look on a sunnier day.