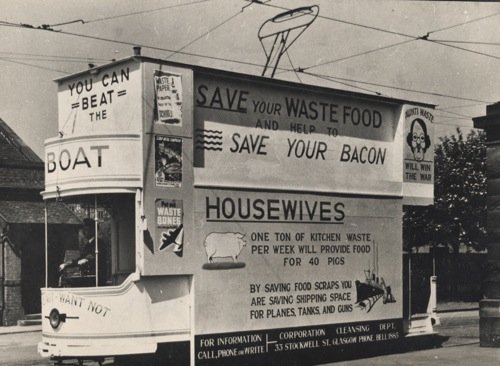 This is one of a trilogy of books using material from the Mass-Observation archives. To quote Wikipedia:

Mass-Observation was a United Kingdom social research organisation founded in 1937. Their work ended in the mid 1950s … Mass-Observation aimed to record everyday life in Britain through a panel of around 500 untrained volunteer observers who either maintained diaries or replied to open-ended questionnaires.

We Are At War is an account of the period from August 1939 to about the start of the Blitz, compiled from the diaries of five M-O participants. It’s a simple idea and it works brilliantly. The diaries combine the texture of everyday life—people write about the weather or what’s on the radio—with the backdrop of great events happening in Europe.

[photo from the Museum of London picture library]

People’s moods—not just the diarists, but their workmates and family—are one of the most interesting things: swings between optimism and pessimism about the war, including, in the early stages, whether it was even going to happen; the stress of expecting air raids for months before they actually start happening; endless gossip about German spies supposedly having been arrested after committing some faux pas to reveal their identity; a distrust of official news and an uneasy fascination with listening to Lord Haw-Haw.

One thing that’s noticeable is a gradual hardening of attitudes towards the Germans; initially people try to maintain some kind of distinction between the Nazis and the German people, and express some kind of regret at news of German casualties, but they get increasingly ruthless as time goes on and British casualties rise.

I could quote almost any chunk of this book; but this will do, from February 1940 in Glasgow:

Recently Miss Crawford saw a notice in a fish shop: ‘Fish cheap today.’ On looking closer she found the stock consisted of a few pieces of sole at 3s 4d. Since the war broke out I have stopped looking at the fish shops for I know the prices would be too high. It transpires that practically everyone has ceased to eat fish, but the price is not the sole cause. Miss Carswell said she could not bear to eat fish because she remembered what perils the fisherman had been through to get it. Then she continued that she could not bear to eat fish in case they had been feeding on all the dead bodies. Her mother had offered her tinned salmon. ‘for that had been canned before the war began’.

(As usual, this review has also been posted to my recently read books section.)

The story of the German invasion of Crete during WW2 and, to a lesser extent, the resistance thereafter.

This is really a book of cockups all round; the Germans had already taken the Greek mainland and planned a completely airborne invasion of Crete using paratroops and gliders which was, as it turned out, wildly ambitious, not least because a man floating down on a parachute is an easy target for someone on the ground. Moreover, thanks to Bletchley Park, the Allied commander had access to information derived directly from German radio traffic.

Nonetheless, thanks to bad planning (for example, the Allies had been in the island for many months, but they still didn’t have a robust communications network in place), lack of initiative, and most crucially, the Allied CO’s misunderstanding of the intelligence he was being given, the Germans managed to take Crete, although with enormous losses, and the Brits, Aussies and New Zealanders had to make a scrambled retreat across the island. Helped by the terrifying ferocity of the Cretans, who had several centuries of experience fighting guerrilla wars against the Ottoman Empire, and since becoming part of Greece in 1918, had kept in practice with hunting and blood-feuds.

And of course with the Allies gone, the Germans then had a brutal crack-down on the Cretans. After the invasion the British helped set up a resistance network on the island, and eventually as the tide of the war turned, Crete was won back.

The overriding thing I was left with from the book was Crete once again getting caught up in the violent arguments of big countries that really had nothing to do with them.

The book feels a bit British-centric, but other than that it seemed to give a good account of what happened, and Beevor writes well.

I found this article in the Independent interesting. There’s a film coming out in France called Indigènes about “the 300,000 Arab and north African soldiers who helped to liberate France in 1944.” Apparently about half the French army in 1944 was African or Arab. The director and producer, both French of North African descent, “hope the film will remind the majority population of France that the country owes a deliberately obscured debt of blood to colonial soldiers with brown and black skins. They also hope the film will persuade young French people of African origin that they belong in France.”

In one respect, the film has already succeeded where years of complaints have failed. Last week, just before it reached the cinema, the French government was shamed into paying belated full pensions to 80,000 surviving ex-colonial soldiers who, since 1959, have been paid a fraction of what French veterans receive.

All of which is quite interesting, but I was mainly struck that the article managed to get all the way through exuding a sense of superiority to those racist French without commenting on the British parallel. There were really quite a lot of colonial troops fighting for the British in the war, most notably the Indian Army, which in WWII was the largest all-volunteer army ever assembled. Unsurprisingly, the Indian Army was important in the Burma campaign, but they also fought in North Africa, the Middle East and Italy. I think I read once that a third of troops at the battle of El-Alamein were Indian. There aren’t too many Indian faces in all those old war films, though, and I really don’t think most British people know anything about their role. And given that the Ghurkas who are current members of the British army still don’t get the same pensions as their British counterparts, it seems a fair bet that Indian veterans of El-Alamein and Monte Cassino don’t either.

This particular blindspot in the British view of history isn’t simply a race thing, of course. Only a minority of the ‘British’ Eighth Army at El-Alamein was actually British; apart from the Indians, there were troops from Australia, Canada, New Zealand, South Africa and Rhodesia; and even a few Free French and Poles. But I only know that because I just looked it up in Wikipedia, and I imagine that most people in this country would have assumed, like me, that the British Army was, basically, British.

Quite apart from the fact that le fairplay demands these things be better known, the French example makes me think – there must be a good film in this somewhere. Or novel. Or even poem, at a pinch.