After my recent rant about what epic poetry isn’t, I feel I ought to share the fact that Dante’s Inferno is being made into… a computer game.

Can you hear that distant buzzing sound? That’s Dante spinning in his grave.

I admit to being intrigued, though; since the poem is distinctly short of sword-wielding action, being more of a walking tour of hell than anything else, I am curious to know how they’ve turned it into a game. And it does look sort of cool. 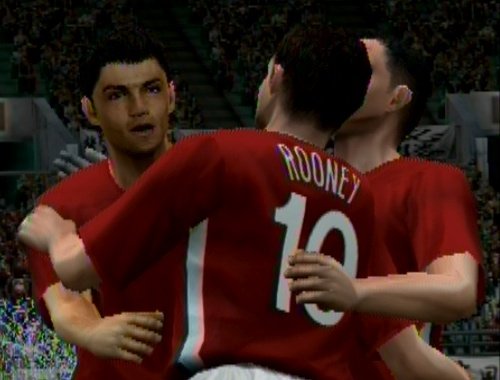 One reason this blog has been quiet over the past week or so is that I’ve been engrossed in Puzzle Quest, perhaps the geekiest computer game of all time.

It’s an RPG with all the standard trappings thereof: orcs, trolls, giant rats, lots of character statistics, magic weapons, spells and so on. Except that when you meet a troll or a dragon or whatever, instead of hitting it with your sword, you challenge it to a game of Connect 4. Or what Connect 4 would be like if you had seven different kinds of counters dropped randomly into the top of the grid and you had to make lines to gain the magical energy to cast spells.

So it’s really a puzzle game with added orcs. The plotting, characterisation and so on are extremely flimsy, but it doesn’t really matter because the puzzling is really quite absorbing and the game eats up hours at a time quite easily.

I was struck again by how far the internet has come so quickly when I got stuck on a particular bit, googled ‘capture wolfrider’, and was pointed directly to a video someone had uploaded showing how to do it. Truly we are living in a brave new world.

Technological change is extraordinarily rapid, yet somehow it seems to creep up on us. The internet went from being an obscure curiosity for the geeky to part of people’s everyday lives without most of us ever having a eureka moment when the change was brought home to us.

I have had a few such moments, though. I still remember the moment I saw my first proper 3D game, Virtua Fighter — in a Vegas casino, of all places — as incredibly exciting. I would quite seriously compare it to what it must have been like for the audiences when they first saw The Jazz Singer. It was jaw-dropping to see these graphics which were simply unlike anything I’d ever seen before.

It helped that it was completely unexpected. I didn’t read the gaming press, videogames barely made the mainstream media unless there was a moral panic going on, and the internet barely existed – I’d certainly never used it. So I had no prior knowledge; I just stumbled on the cabinet among all the other games and was blown away by it. What struck me most wasn’t the greater realism of the characters, exactly: even in the moment of first seeing it, the blockiness of the characters looked pretty primitive. But the way the characters moved in three dimensions really did make it feel more like you were controlling a ‘person’ rather than just an animation. And more than anything, it was the swooping camera, that moved around the action and zoomed in and out as you played, which brought home this shift from a flat game world to one with depth.

I’ve already compared it the shift from silent movies to talkies; a more exact comparison would be the invention of perspective in Renaissance painting. I don’t want to use hindsight to claim that I saw Virtua Fighter and immediately had a sense of all the ways 3D would have an impact on gaming, but it didn’t take any particular brilliance to see it and know that you were present at the start of something. Perhaps in C15th Italy there were people feeling the same way.

I still like the look of the original Virtua Fighter. I know that the minimalist environment — a bit of texture on the ground and a few clouds — is because of technical limitations rather than aesthetic choice, but I find it appealing. If you see the later versions of the game (they’re currently up to Virtua Fighter 4, with VF5 due out this year), the backgrounds are ever more lushly-detailed graphical marvels, mainly for the sake of eye-candy but also as part of a pointless attempt to build a narrative context. The places they fight are related to the characters’ elaborate back-stories. But really, what’s the point? It’s a beat-em-up; I don’t need to know my character’s motivation. And while I was excited as anyone else by the advances in computer graphics at the time, that lush, hyper-realistic aesthetic gets cloying after a while. It’s about time for a bit of less-is-more.

Comparisons with early cinema and Renaissance painting inevitably bring up the question of games as art. That’s not what I had in mind when I made them, and I certainly wouldn’t pick Virtua Fighter as a case study, since apart from the graphics it was the simplest and most formulaic game imaginable. But even discussing a game this simple, the kinds of things I find myself mentioning — the overall visual styling, the way the 3D characters made it more immersive, the characterisation, set design, lighting, camerawork — make comparisons with various artforms almost inevitable. That’s why it seems certain that descendants of today’s games will be treated as artworks with all the importance of films, novels or paintings. Someone will find a way of bringing it all together and making it into something more.