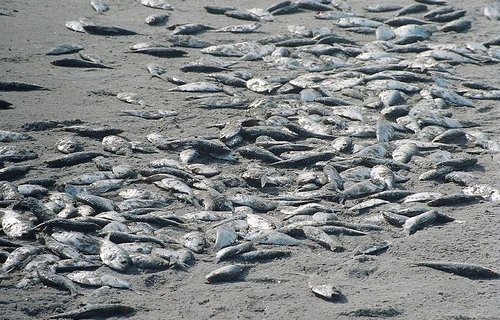 More from the ephemera collection at the British Library. You might also want to look at the Wonder of the Sea and American Jack, the Frog Man. Not to mention A.H. Minting, the Marvellous Spiral Ascensionist.

All those rainforest plants were nice, and I enjoyed taking wildflower photos while I was in Spain. But, not least because it’s nice to pick a winner that I can actually identify, I’m going for the Galapagos Prickly Pear, Opuntia echios. On islands where there are giant tortoises and land iguanas, they’ve evolved woody trunks and have fierce spines; on other islands they don’t have the trunks and they have soft bendy spines. And I enjoyed taking macro pictures of them, like this bit of trunk: There were some great butterflies in the jungle – notably spectacular blue morphos – and a particularly striking leaf-mimicking moth, but my winner is the Painted Locust.

The shortlist would include the tarantula I saw in the rainforest – a first for me – the Chocolate Chip Sea Star and Galapagos Slipper Lobster (curious-looking and tasty), but the undoubted star in this category was the Sally Lightfoot Crab.

Piranha deserves a mention, even if I didn’t see one actually in the water, and it was very gratifying to see sharks swimming long with just their fins sticking out of the water, like what they do in the movies. But I had two special fish in the Galapagos this year. For the first, we were anchored off an island at night. Lots of fish had been attracted to the boat’s lights, and they in turn had attracted sea-lions and turtles, so we were watching them splashing around in the phosphorescence. Every so often there would be a splash where one of the sea-lions was swimming and a trail of phosphorescence would shoot off, zig-zagging over the water. It took me a few occasions to realise that they were flying fish. Which was cool.

The other came when I was trying to track down something splashing in the distance — I thought it was probably a dolphin, but I kept missing it or not seeing it well enough to identify. When I finally got binoculars on it, I was stunned to realise it was a manta ray leaping clear of the water. Later on in the trip we saw them a bit closer, and it was an absolute thrill. They don’t look like the most aerodynamic beasties, and it’s extraordinary seeing them launch themselves and twist in midair before crashing back into the water. Manta ray and flying fish are both species I’ve wanted to see for a very long time, but the manta wins the award for best fish of 2006.

A teeny-weeny poison arrow frog in the rainforest.

It’s all Galapagos in this category: the shortlist is Green Turtle, Land Iguana, Marine Iguana and Giant Tortoise. It’s always nice to see turtles, and especially to swim with them, but I’ve seen them before. The three Galapagos specialities are all among the most desirable reptile species in the world. The tortoises are fun, and even bigger than you expect; the land iguana is a striking-looking beast. But it’s the marine iguanas which really stand out. The fact that they’re lizards which swim out to sea to feed would almost be enough to win them the category, but they’re one of the continual pleasures of visiting the islands; you have to be careful not to step on them, they’re so indifferent to your presence. And you see them in great scaly drifts draped all over the lava, occasionally sneezing out the excess salt or aggressively nodding their heads at each other but mainly spending their time basking in the sun like hungover English tourists. They have a rugged, rock-hewn saurian quality that makes them seem like survivors from a distant epoch, which is misleading since in fact the islands, by evolutionary standards, are relatively young.

I saw squirrels and monkeys in the jungle, and in another year those might be in contention for Best Mammal. And then there was the dozens and dozens of Bottle-nosed Dolphins and False Killer Whales that turned up unexpectedly one morning and which swam around the dinghy for us to see, or the dolphins that rode the bow-wave of the ship, jumping and twisting. But there can be no doubt that the Galapagos Sea Lion is the winner this year. It’s such a treat to be able to just wander past these animals and have them pay you no attention but just get on with playing, suckling their pups (cubs?) or most often just lying around. The babies are fantastically cute, and the males are imposing, but the general impression is big furry bolsters — until you’re snorkelling along and suddenly a sea lion swims past underneath and looks up at you, and you realise that they’re sleek, graceful, muscular, and quite large. I found having a sea lion stick it’s nose up to my snorkel mask exciting but just a little bit intimidating. I think that’s a good thing; it’s good to be reminded from time to time that animals are not toys or pets or little furry people, but something quite alien. We tend to see animals in a human context, as food, pests, entertainment, ‘endangered species’; it’s good to feel like the outsider in their environment.

Andalusia in spring was gorgeous. The marsh itself, with nightingales and Cetti’s warblers singing in every bush, and the sun on the water; the dry scrubby stuff with Dartford Warblers and Red-legged Partridge, and possibly best of all, sandy pine woodlands, with the amazing contrast between the glare of the noon sun and the deep shade, and the noise of bees and crickets in the heat.

And the lava fields of the Galapagos are like nowhere else on earth. It’s not a gentle landscape — uneven, sunbaked rock with the occasional cactus or thornbush hanging on as best it can — but the ripples and flows of the lava are endlessly fascinating. It’s geology made ridiculously simple; you can just look at it and see how it formed. And it brings home the endless capacity of life to find a way to live in unpromising places; the cacti colonising the bare rock before soil has a chance to form, the mangroves on the beach, and sea lions, seabirds, iguanas, sea stars, crabs and fish on the little fringe where the land meets the sea. And it’s not just interesting; it has a real beauty to it. It’s dramatic and odd and textured.

But my ecosystem of the year was none of those; it was the Ecuadorian cloudforest. I mean, it’s a rainforest with spectacular mountain views: how can you go wrong? The birds are actually sometimes at eye-level, unlike the lowland forest, and the temperatures are very moderate, even chilly sometimes. The humidity is such that plants just grow everywhere; you get the feeling that if you nodded off up on the mountain, you’d wake up covered in moss. There are trees up there which are so covered in epiphytes, bromeliads, moss, ferns and creepers that you can only roughly tell where the trunk and branches are. And every so often the cloud closes in, and instead of spectacular vistas, the world shrinks right down so it’s just you and the mist and a lot of weird calls from invisible birds.

I don’t have a photo which does justice to the vegetation (my camera batteries died), but here are some mountains: by Fugue. Used under a CC by-sa licence.

So, what’s the world’s biggest fish? That’s easy – it’s the Whale Shark. But what about the world’s longest fish? Well, that’s probably the Whale Shark too, to be honest – the trouble is, it’s a category that tends to attract a lot of over-excited and completely unconfirmable reports. But the other fish that has a claim to be the longest is a species of Oarfish, Regalecus glesne, sometimes called ‘King of Herrings’:

It’s certainly the longest bony fish in the world; i.e. it’s not a shark. As an evolutionary footnote, you are more closely related to the Oarfish than the Oarfish is related to the sharks. If you think about it, that has to be true, because all mammals and bony fish are descended from some first ancestral bony fish, whereas sharks (which have cartilaginous skeletons) are not. The heaviest bony fish is the Sunfish, Mola mola. All giant fish species – the big sharks, the sunfish, and others like the Manta Ray – would be great to see. But the Oarfish really caught my imagination when I learnt about them as a kid, and I’d still love to see one – preferably a big one. How big? Well, they’ve been reliably measured to about 12m (40′), apparently, but reported up to lengths of 17m – 56′. That’s the height of a 5 storey building. Height is the right word here because, as you can see above, they have a very peculiar posture when feeding. Here’s some Navy Seals with a 24′ specimen:

“Sometimes entire animals such as the stormy petrel and the candlefish of the Pacific Northwest were threaded with a wick and burned as candles.”